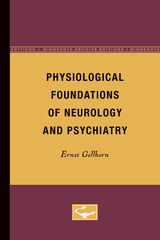 BUY
Physiological Foundations of Neurology and Psychiatry
by Ernst Gellhorn
University of Minnesota Press, 1953
Paper: 978-0-8166-6862-5
Physiological Foundations of Neurology and Psychiatry was first published in 1953.The findings of Dr. Gellhorn’s extensive and significant research on the physiology of the central nervous system form the basis of the discussion in this volume. Reference is frequently made to the applicability of this laboratory experience to clinical as well as other fields. An attempt has been made to integrate the clinical and experimental literature with the discussion, to give an up-to-date picture of the problems involved and to indicate the possibilities for future investigation. Topics of interest to physiologists, endocrinologists, internists, neurologists and neurosurgeons, psychiatrists, and clinical psychologists are discussed.An important aspect of the author’s work concerned certain recent tests which show an altered reactivity of autonomic centers in the psychotic condition. His interpretation of the significance of these tests for a physiologically oriented therapy of functional psychoses is published here for the first time. The physiological effects actually produced in the central nervous system by “shock” treatment and carbon dioxide therapy are analyzed.Other sections give consideration to some of the principal working mechanisms of the neuron, to the factors determining movements and convulsions, to the pathophysiology of cortical lesions, to some aspects of autonomic physiology, and to the problem of consciousness. An important section deals with integrative functions of the nervous system - those involved in emotion, the conditioning process as the basis of behavior, and homeostasis.