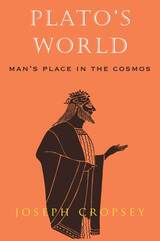 In this culmination of a lifetime's study, Joseph Cropsey examines the crucial relationship between Plato's conception of the nature of the universe and his moral and political thought.

Cropsey interprets seven of Plato's dialogues—Theaetetus, Euthyphro, Sophist, Statesman, Apology, Crito, and Phaedo—in light of their dramatic consecutiveness and thus as a conceptual and dramatic whole. The cosmos depicted by Plato in these dialogues, Cropsey argues, is often unreasonable, and populated by human beings unaided by gods and dealt with equivocally by nature. Masterfully leading the reader through the seven scenes of the drama, Cropsey shows how they are, to an astonishing degree, concerned with the resources available to help us survive in such a world.

This is a world—and a Plato—quite at odds with most other portraits. Much more than a summary of Plato's thinking, this book is an eloquent, sometimes amusing, often moving guide to the paradoxes and insights of Plato's philosophy.
TABLE OF CONTENTS