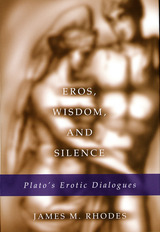 Eros, Wisdom, and Silence is a close reading of Plato’s Seventh Letter and his dialogues Symposium and Phaedrus, with significant attention also given to Alcibiades I. A book about love, James Rhodes’s work was conceived as a conversation and meant to be read side by side with Plato’s works and those of his worthy interlocutors. It invites lovers to participate in conversations that move their souls to love, and it also invites the reader to take part in the author’s dialogues with Plato and his commentators.
Rhodes addresses two closely related questions: First, what does Plato mean when he says in the Seventh Letter that he never has written and never will write anything concerning that about which he is serious? Second, what does Socrates mean when he claims to have an art of eros and that this techne is the only thing he knows?
Through careful analysis, Rhodes establishes answers to these questions.
He determines that Plato cannot write anything concerning that about which he is serious because his most profound knowledge consists of his soul’s silent vision of ultimate, transcendent reality, which is ineffable. Rhodes also shows that, for Socrates, eros is a symbol for the soul’s experience of divine reality, which pulls every element of human nature toward its proper end, but which also leads people to evil and tyranny when human resistance causes it to become diseased.
Opening up a new avenue of Plato scholarship, Eros, Wisdom, and Silence is political philosophy at its conversational best. Scholars and students in political philosophy, classical studies, and religious studies will find this work invaluable.
AUTHOR BIOGRAPHY
James M. Rhodes is Professor of Political Science at Marquette University in Milwaukee, Wisconsin. He is the author of The Hitler Movement: A Modern Millenarian Revolution.