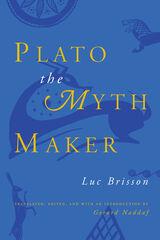 The word myth is commonly thought to mean a fictional story, but few know that Plato was the first to use the term muthos in that sense. He also used muthos to describe the practice of making and telling stories, the oral transmission of all that a community keeps in its collective memory. In the first part of Plato the Myth Maker, Luc Brisson reconstructs Plato's multifaceted description of muthos in light of the latter's Atlantis story. The second part of the book contrasts this sense of myth with another form of speech that Plato believed was far superior: the logos of philosophy.

Gerard Naddaf's substantial introduction shows the originality and importance both of Brisson's method and of Plato's analysis and places it in the context of contemporary debates over the origin and evolution of the oral tradition.
"[Brisson] contrasts muthos with the logos found at the heart of the philosophical reading. [He] does an excellent job of analyzing Plato's use of the two speech forms, and the translator's introduction does considerable service in setting the tone."—Library Journal
AUTHOR BIOGRAPHY
Luc Bisson is the directeur de recherche at the Centre National de la Recherche Scientifique and vice president of the International Plato Society.

Gerard Naddaf is an associate professor of philosophy at York University.
TABLE OF CONTENTS


Translator's Introduction
A Note on the Translation
List of Abbreviations
Preface to the Second Edition
Preface to the First Edition
Introduction
PART I: PLATO'S TESTIMONY: The Communication of the Memorable
1. Information
2. Means of Transmission
3. Fabrication
4. Narration
5. Reception
6. Imitation
7. Persuasion
PART II: PLATO'S CRITIQUE: The Discourse of and for the Other
8. Myth as Discourse
9. The Opposition between Myth and Falsifiable Discourse
10. The Opposition between Myth and Argumentative Discourse
11. The Utility of Myth
12. The Repudiation of Allegorical Interpretation
13. Plato's Derivative Use of the Term "Muthos"
Conclusion
Appendixes
Bibliography
Index of Passages Cited or Mentioned
Index of Greek Terms
General Index