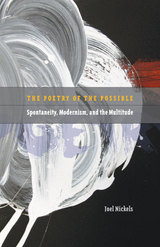 The Poetry of the Possible challenges the conventional image of modernism as a socially phobic formation, arguing that modernism’s abstractions and difficulties are ways of imagining unrealized powers of collective self-organization. Establishing a conceptual continuum between modernism and contemporary theorists such as Paulo Virno, Michael Hardt, Antonio Negri, and Alain Badiou, Joel Nickels rediscovers modernism’s attempts to document the creative potenza of the multitude.

By examining scenes of collective life in works by William Carlos Williams, Wyndham Lewis, Laura Riding, and Wallace Stevens, Nickels resurrects modernism’s obsession with constituent power: the raw, indeterminate capacity for reciprocal counsel that continually constitutes and reconstitutes established political regimes. In doing so, he reminds us that our own attempts to imagine leaderless networks of collective initiative are not so much breaks with modernist forms of knowledge as restagings of some of modernism’s most radical moments of political speculation.

Setting modernism’s individual and collective models of spontaneity in dialogue with theorists of political spontaneity such as Antonio Gramsci, Herbert Marcuse, and Theodor Adorno, Nickels retells the story of modernism as the struggle to represent powers of collective self-organization that lie outside established regimes of political representation.

Joel Nickels is assistant professor of English at the University of Miami.