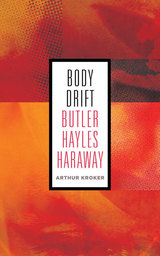 As exemplary representatives of a form of critical feminism, the writings of Judith Butler, Katherine Hayles, and Donna Haraway offer entry into the great crises of contemporary society, politics, and culture. Butler leads readers to rethink the boundaries of the human in a time of perpetual war. Hayles turns herself into a “writing machine” in order to find a dwelling place for the digital humanities within the austere landscape of the culture of the code. Haraway is the one contemporary thinker to have begun the necessary ethical project of creating a new language of potential reconciliation among previously warring species.

According to Arthur Kroker, the postmodernism of Judith Butler, the posthumanism of Katherine Hayles, and the companionism of Donna Haraway are possible pathways to the posthuman future that is captured by the specter of body drift. Body drift refers to the fact that individuals no longer inhabit a body, in any meaningful sense of the term, but rather occupy a multiplicity of bodies: gendered, sexualized, laboring, disciplined, imagined, and technologically augmented.

Body drift is constituted by the blast of information culture envisioned by artists, communicated by social networking, and signified by its signs. It is lived daily by remixing, resplicing, and redesigning the codes: codes of gender, sexuality, class, ideology, and identity. The writings of Butler, Hayles, and Haraway, Kroker reveals, provide the critical vocabulary and political context for understanding the deep complexities of body drift and challenging the current emphasis on the material body.

Arthur Kroker is Canada Research Chair in Technology, Culture, and Theory and professor of political science at the University of Victoria, Canada. He is the author or editor of many books, including The Will to Technology and the Culture of Nihilism: Heidegger, Nietzsche, and Marx. With Marilouise Kroker, he edits the acclaimed online scholarly review CTheory.net.

2. Contingencies: Nietzsche in Drag in the Theater of Judith Butler