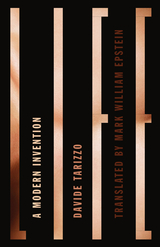 The word “biology” was first used to describe the scientific study of life in 1802, and as Davide Tarizzo demonstrates in his reconstruction of the genealogy of the concept of life, our understanding of what being alive means is an equally recent invention. Focusing on the histories of philosophy, science, and biopolitics, he contends that biological life is a metaphysical concept, not a scientific one, and that this notion has gradually permeated both European and Anglophone traditions of thought over the past two centuries.

Building on the work undertaken by Foucault in the 1960s and ‘70s, Tarizzo analyzes the slow transformation of eighteenth-century naturalism into a nineteenth-century science of life, exploring the philosophical landscape that engendered biology and precipitated the work of such foundational figures as Georges Cuvier and Charles Darwin.

Tarizzo tracks three interrelated themes: first, that the metaphysics of biological life is an extension of the Kantian concept of human will in the field of philosophy; second, that biology and philosophy share the same metaphysical assumptions about life originally advanced by F. W. J. Schelling and adopted by Darwin and his intellectual heirs; and third, that modern biopolitics is dependent on this particularly totalizing view of biological life.

Circumventing tired debates about the validity of science and the truth of Darwinian evolution, this book instead envisions and promotes a profound paradigm shift in philosophical and scientific concepts of biological life.

Davide Tarizzo is assistant professor of moral philosophy at the University of Salerno.

Mark William Epstein has translated numerous books, including Lars-Henrik Olsen’s Tracks and Signs of the Animals and Birds of Britain and Europe and Luca Peliti’s Statistical Mechanics in a Nutshell.

"The translation of Italian philosopher Davide Tarizzo’s Life is a cause for celebration. Tarizzo goes where others haven’t in order to ask the following question: when did we actually become alive? His answer is deeply unsettling. Part political philosophy, part genealogy of aliveness, part faithfully radical account of Darwinian evolution, Tarizzo has written a vertiginous reflection on what it truly means to be ‘savagely’ alive—in other words, biopolitics 2.0. Not to be missed."—Timothy Campbell, Cornell University

"In this outstanding book, the biological paradigm of modern life is traced back, probably for the first time, to its philosophical and metaphysical sources. By connecting Darwin's dangerous idea with those of Kant's and Schelling's, Davide Tarizzo raises the most challenging questions about our future of living beings."—Roberto Esposito, author of Bíos: Biopolitics and Philosophy

1. Modernity: The Threshold of Autonomy

2. Life: Genesis of a Metaphysical Paradigm

3. Us: On the Use and Abuse of Life for History