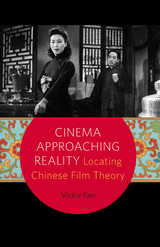 In Cinema Approaching Reality, Victor Fan brings together, for the first time, Chinese and Euro-American film theories and theorists to engage in critical debates about film in Shanghai and Hong Kong from the 1920s through 1940s. His point of departure is a term popularly employed by Chinese film critics during this period, bizhen, often translated as “lifelike” but best understood as “approaching reality.” What these Chinese theorists mean, in Fan’s reading, is that the cinematographic image is not a form of total reality, but it can allow spectators to apprehend an effect as though they had been there at the time when an event actually happened.

Fan suggests that the phrase “approaching reality” can help to renegotiate an aporia (blind spot) that influential French film critic André Bazin wrestled with: the cinematographic image is a trace of reality, yet reality is absent in the cinematographic image, and the cinema makes present this absence as it reactivates the passage of time. Fan enriches Bazinian cinematic ontology with discussions on cinematic reality in Republican China and colonial Hong Kong, putting Western theorists—from Bazin and Kracauer to Baudrillard, Agamben, and Deleuze—into dialogue with their Chinese counterparts. The result is an eye-opening exploration of the potentialities in approaching cinema anew, especially in the photographic materiality following its digital turn.

Victor Fan is lecturer in film studies at King’s College London. He has contributed extensively to academic journals, including Screen, Film History, and Camera Obscura.