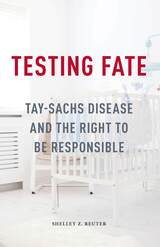 In today’s world, responsible biocitizenship has become a new way of belonging in society. Individuals are expected to make “responsible” medical choices, including the decision to be screened for genetic disease. Paradoxically, we have even come to see ourselves as having the right to be responsible vis-à-vis the proactive mitigation of genetic risk. At the same time, the concept of genetic disease has become a new and powerful way of defining the boundaries between human groups. Tay-Sachs, an autosomal recessive disorder, is a case in point—with origins in the period of Eastern European Jewish immigration to the United States and United Kingdom that spanned the late nineteenth and early twentieth centuries, it has a long and fraught history as a marker of Jewish racial difference.

In Testing Fate, Shelley Z. Reuter asks: Can the biocitizen, especially one historically defined as a racialized and pathologized Other, be said to be exercising authentic, free choice in deciding whether to undertake genetic screening? Drawing on a range of historical and contemporary examples—doctors’ medical reports of Tay-Sachs since the first case was documented in 1881, the medical field’s construction of Tay-Sachs as a disease of Jewish immigrants, YouTube videos of children with Tay-Sachs that frame the disease as tragic disability avoidable through a simple genetic test, and medical malpractice suits since the test for the disease became available—Reuter shows that true agency in genetic decision-making can be exercised only from a place of cultural inclusion. Choice in this context is in fact a kind of unfreedom—a moral duty to act that is not really agency at all.

Shelley Z. Reuter is associate professor of sociology at Concordia University. She is the author of Narrating Social Order: Agoraphobia and the Politics of Classification.

Contents
Introduction: A Critical Historical Sociology of Disease
Part I. Pathologizing the Other
1. Diagnosing the Genuine “Jewish Type”: Medical Racialism and Anti-Immigration Legislation in the United States
2. Governing Disease: Cultivating the Will to Health in Jewish Immigrants to the United Kingdom
Part II. Imag(in)ing Difference
3. “Plainer Than Words Can Describe”: Medical Portraiture and the Visualization of a Jewish Disease
4. The Unethics of Looking at Disease–Disability: Online Representations of Tay-Sachs
Part III. Paradoxical Biocitizenship
5. The Right to Be Responsible: Agency and Contemporary Carrier Screening
Conclusion: Freedom, Exclusion, and Genetic Decision Making
Acknowledgments
Notes
Bibliography
Index