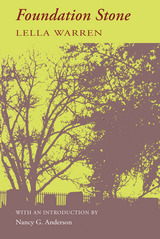 Using the history of Alabama and the stories of her pioneering ancestors, Lella Warren created the Whetstone clan who settled Alabama in the 1820s, helped lead it into the prosperity of the 1850s, and fought for it in the War Between the States. The historical background of Foundation Stone is authentic, but, more, it is a compelling story about believable characters. The story of these people—three generations of Whetstones—captures the American pioneering spirit. As an unidentified reviewer described the novel, “Lella Warren’s ‘Foundation Stone’ is the long, well-told chronicle of a family that loved and hoped and struggled in a difficult world, unaware that they symbolized an era and a way of life.” Foundation Stone was published in September 1940 and was on the Publishers Weekly bestseller list September 1940-February 1941, along with Hemingway’s For Whom the Bell Tolls and Wolfe’s You Can’t Go Home Again.

Nancy G. Anderson is Director of Composition and Assistant Professor of English, Auburn University at Montgomery