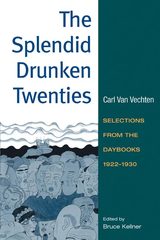 Between 1922 and 1930, Carl Van Vechten--one of the most significant figures of the Harlem Renaissance--kept a daily record of his activities. The records recount his day-to-day life, as well as the alliances, drinking habits, feuds, and affairs of a wide number of the period's luminaries, providing a rich resource for reconstructing the culture of 1920s New York and the social milieu during Prohibition. Bruce Kellner has provided copious informative notes identifying central figures and clarifying details.