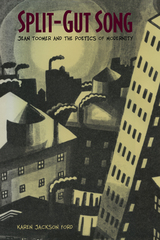 A deft study of the evolving literary aesthetic of one of the first avant-garde black writers in America.

In Split-Gut Song, Karen Jackson Ford looks at what it means to be African American, free, and creative by analyzing Jean Toomer's main body of work, specifically, his groundbreaking creation Cane. When first published in 1923, this pivotal work of modernism was widely hailed as inaugurating a truly artistic African American literary tradition. Yet Toomer's experiments in literary form are consistently read in terms of political radicalism—protest and uplift—rather than literary radicalism.

Ford contextualizes Toomer's poetry, letters, and essays in the literary culture of his period and, through close readings of the poems, shows how they negotiate formal experimentation (imagism, fragmentation, dialect) and traditional African American forms (slave songs, field hollers, call-and-response sermons, lyric poetry). At the heart of Toomer's work is the paradox that poetry is both the saving grace of African American culture and that poetry cannot survive modernity. This contradiction, Ford argues, structures Cane, wherein traditional lyric poetry first flourishes, then falters, then falls silent.

The Toomer that Ford discovers in Split-Gut Song is a complicated, contradictory poet who brings his vexed experience and ideas of racial identity to both conventional lyric and experimental forms. Although Toomer has been labelled a political radical, Ford argues that politics is peripheral in his experimental, stream-of-consciousness work. Rather Toomer exhibits a literary radicalism as he struggles to articulate his perplexed understanding of race and art in 20th-century America.

AUTHOR BIOGRAPHY
Karen Jackson Ford is Associate Professor of English at the University of Oregon.
TABLE OF CONTENTS