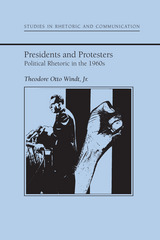 The decade of the 1960s was a time of passionate politics and resounding rhetoric. The “resounding rhetoric,” from Kennedy’s celebrated inaugural address, to the outlandish antics of the Yippies, is the focus of this book. The importance of this volume is its consideration of both people in power (presidents) and people out of power (protesters), and its delineation of the different rhetorical bases that each had to work from in participating in the politics of the 1960s.

An excellent and lucid introduction to the study of political rhetoric, Presidents and Protesters places rhetorical acts within their specific political contexts, changing the direction of previous rhetorical studies from the sociological to the historical-political.

Above all, this is an intellectual history of the 1960s as seen through the rhetoric of the participants, which ultimately shows that the major participants utilized every form of political discourse available and, consequently, exhausted not only themselves but the rhetorical forms as well.

Theodore Otto Windt, Jr., is Professor of Political Rhetoric at the University of Pittsburgh.