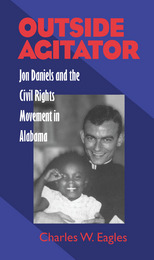 Outside Agitator: Jon Daniels and the Civil Rights Movement in Alabama
by Charles Eagles
University of Alabama Press, 2000
Paper: 978-0-8173-1069-1

Outside Agitator tells the dramatic, largely forgotten storybehind the 1965 killing of civil rights worker Jonathan Myrick "Jon" Daniels in Lowndes County, Alabama, detailing the lives of the killer and the victim. A white Episcopal seminary student from New Hampshire, Jon Daniels helped organize blacks in Selma during the events that led to the Selma-to-Montgomery march. In August 1965 he was fatally shot in neighboring Lowndes County by Tom Coleman, a highway department engineer and steadfast segregationist, who was later acquitted by an all-white jury.

Lowndes County was a bastion of white minority dominance. For half a century, no black had voted or served on a jury there. Known for the violence used by whites to maintain their control, "bloody" Lowndes presented Daniels and other civil rights workers with almost insurmountable obstacles. Tom Coleman, a Lowndes County native, represented the consensus among local whites that violent resistance to racial change was justified. To defend his community and to prevent change, he resorted to violence against "outside agitators."

Following the deaths of a score of other civil rights workers, the killing of Jon Daniels was in many ways the last atrocity of the first, southern, nonviolent phase of the Civil Rights movement. This exploration of how Daniels and Coleman came to be at opposite ends of a shotgun outside a county store captures the mechanics and emotions of forces promoting and resisting change in southern race relations. Charles Eagles reminds us that however representative Daniels and Coleman may have been of larger forces, they were nevertheless real individuals with distinctive personalities caught up in specific circumstances.

Charles Eagles, Professor of History at the University of Mississippi, is the author of several books, including Democracy Delayed: Congressional Reapportionment and Urban-Rural Conflict in the 1920s, and editor of The Civil Rights Movement in America.