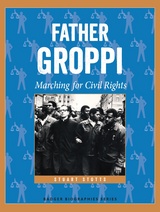 "Father Groppi: Marching for Civil Rights" tells the story of Father James Groppi, a Catholic priest from Milwaukee, Wis., who stood up for civil rights in the 1960s and 1970s.

This important new addition to the Badger Biographies series for young readers also tells about a turbulent time in Wisconsin history and sheds light on the civil rights movement and its place in the North.

Growing up on the south side of Milwaukee as the son of Italian immigrants, young James Groppi learned early on what it felt like to be made fun of just because of who you are, and he learned to respect people from other races and ethnic groups. Later, while studying to become a priest, he saw the discrimination African Americans faced. It made him angry, and he vowed to do whatever he could to fight racism.

Father Groppi marched with Dr. Martin Luther King Jr. and other leaders of the civil rights movement. But he knew there was work to be done in his own city. In Milwaukee, he teamed up with the NAACP and other organizations, protesting discrimination and segregation wherever they saw it. It wasn't always easy, and Father Groppi and the other civil rights workers faced great challenges.