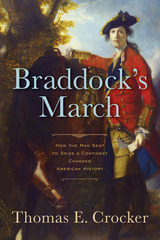 "Before we parted, the General told me he should never see me more; for he was going with a handful of men to conquer whole nations; and to do this they must cut their way through unknown woods. He produced a map of the country, saying at the same time, ‘Dear Pop, we are sent like sacrifices to the altar.’”—George Anne Bellamy on General Edward Braddock’s departure

In January 1755, Major General Edward Braddock was sent by Great Britain on a mission to drive France once and for all from the New World. Accompanied by the largest armed expeditionary force ever sent to North America, Braddock’s primary target was the Forks of the Ohio, where he planned to seize Fort Duquesne (at present-day Pittsburgh, Pennsylvania), and then march north into Canada. After landing in Alexandria, Virginia, and organizing his troops and supply chain, Braddock and his expedition began its nearly 250-mile trek, heroically cutting through uncharted wilderness, fording rivers, and scaling the Appalachian mountains, all while hauling baggage and heavy artillery. Braddock was joined on this epic mission by a young Virginia colonel, George Washington, and others who would later play major roles in the American Revolution, including Horatio Gates, Thomas Gage, and Charles Lee; among those driving the expedition’s wagons were Daniel Boone and Daniel Morgan. Having withstood the harsh frontier and finally marching upon Fort Duquesne on a hot July morning, Braddock’s exhausted column was ambushed by a combined French and Indian force. Over two-thirds of Braddock’s British and colonial troops were killed or wounded, including Braddock himself, struck by a bullet in the chest while attempting to rally his disoriented troops. George Washington miraculously escaped harm despite four bullet holes through his clothing. With this battle, North America became the greatest stake in the global war between France and Great Britain.

In Braddock’s March: How the Man Sent to Seize a Continent Changed American History, Thomas E. Crocker tells the riveting story of one of the most important events in colonial America. Not only did Braddock’s expedition have a profound impact on American political and military developments, this fateful march laid the foundation for the “National Pike,” the major road for westward expansion, launched the career of George Washington, and sowed the seeds of dissent between  England and its colonies that would ultimately lead to the American Revolution.

THOMAS E. CROCKER is a partner in a Washington, D.C. law firm. He lives with his family in Virginia.