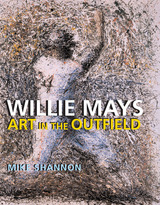 
As much as any other sports figure, Willie Mays embodies the changes that racial integration brought to America’s game fields and its larger culture in the mid-20th century. Playing baseball with grace, skill, flair, and obvious delight, Willie Mays broke color barriers for more than just himself. He combined the ability to stroke majestic home runs while with an equal ability to outrun and catch what would have been home runs for opponents most famously when he turned Vic Wertz’s titantic blast into a long out in the 1954 World Series. As is often said of great players but never more true than in his case, Willie Mays could do it all.

Assembled in this work are 40 representations of how contemporary artists respond to and portray the skill, fame, and sheer love of the game that make Mays so remarkable and memorable. The art includes a broad range of styles and media from impressionistic graphite pencil drawings on paper through realistic Kodachrome photographic prints to expressionistic colored acrylics on canvas or glass. Mike Shannon offers a perceptive introductory essay on Mays’s long career and places the art in the context of his times. First curated as a traveling exhibit to honor Willie Mays’s 75th birthday, the exhibit opened at the Louisville Slugger Museum in Louisville, Kentucky, and is currently on tour.

Mike Shannon is the editor/publisher of Spitball magazine, a keen baseball observer and analyst, and a confessed Mays partisan. He lives in Cincinnati, Ohio.