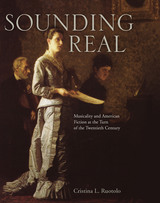 Examining American realist fiction as it was informed and shaped by the music of the period, Sounding Real sheds new light on the profound musical and cultural change at the turn of the twentieth century.
Sounding Real by Cristina L. Ruotolo examines landmark changes in American musical standards and tastes in the late-nineteenth and early-twentieth centuries and the way they are reflected in American literature of the period. Whereas other interdisciplinary approaches to music and literature often focus on more recent popular music and black music that began with blues and jazz, Ruotolo addresses the literary response to the music that occurred in the decades before the Jazz Age.
By bringing together canonical and lesser-known works by authors like Theodore Dreiser, Kate Chopin, Harold Fredric, James Weldon Johnson, Willa Cather, and Gertrude Atherton, Ruotolo argues that new, emerging musical forms were breaking free from nineteenth-century constraints, and that the elemental authenticity or real-ness that this new music articulated sparked both interest and anxiety in literature: What are the effects of an emancipated musicality on self and society? How can literature dramatize musical encounters between people otherwise segregated by class, race, ethnicity, or gender?
By examining the influence of an increasingly aggressive and progressive musical marketplace on the realm of literature, Sounding Real depicts a dynamic dialogue between two art forms that itself leads to a broader discussion of how art speaks to society.