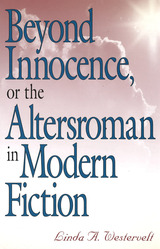 In this groundbreaking work, Linda A. Westervelt defines an important yet previously unidentified and therefore unnamed type of novel, the altersroman, or age novel. Fictions focusing on a protagonist's confrontation with mortality toward the end of middle age are likely to become ever more prominent in a Western world in which the average age of the population increases and more people reach late middle age and old age.

Working from a diverse sample of modern literature, Westervelt analyzes the variety of responses to the life evaluation. Some characters achieve a level of affirmation that allows renewal, redirection, or simply peace, while others confront feelings of disgust or despair that so little time is left them. Her altersromane are books about seeking wisdom, though not everyone of this age becomes wise. The use of the term altersroman highlights the fact that the altersroman is a classification comparable to but also clearly distinguishable from the bildungsroman, wherein characters make the transition from youth to adulthood. Westervelt contrasts her older protagonists' characteristics with the equivalent characteristics in the bildungsroman through an examination of Don Quixote, part 2, as well as six American novels: The Ambassadors, by Henry James; The Professor's House, by Willa Cather; The Mansion, by William Faulkner; The Angle of Repose, by Wallace Stegner; A Book of Common Prayer, by Joan Didion; and Jazz, by Toni Morrison. These seven works, though remarkably different, share the common features of the altersroman. Westervelt articulates the traits clearly, rests them on the psychological literature, and then shows in depth how the characteristics of the altersroman can enrich and more deeply inform our reading of a significant subset of modern literature that previously went unheralded. Readers can use Westervelt's analysis to identify altersromane in literature other than their own, and she begins this process by identifying exemplars written in other languages.

Beyond Innocence, or the Altersroman in Modern Fiction introduces readers to the altersroman as a tool for classification and analysis and demonstrates the power and utility of that tool. It offers a meaningful and enriching complement to the more established category of the bildungsroman.

Linda A. Westervelt is Associate Professor of English at the University of Houston.