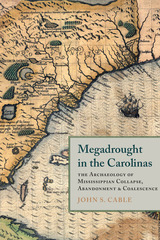 Considers the Native American abandonment of the South Carolina coast

A prevailing enigma in American archaeology is why vast swaths of land in the Southeast and Southwest were abandoned between AD 1200 and 1500. The most well-known abandonments occurred in the Four Corners and Mimbres areas of the Southwest and the central Mississippi valley in the twelfth and thirteenth centuries and in southern Arizona and the Ohio Valley during the fifteenth century. In Megadrought in the Carolinas: The Archaeology of Mississippian Collapse, Abandonment, and Coalescence, John S. Cable demonstrates through the application of innovative ceramic analysis that yet another fifteenth-century abandonment event took place across an area of some 34.5 million acres centered on the South Carolina coast.

Most would agree that these sweeping changes were at least in part the consequence of prolonged droughts associated with a period of global warming known as the Medieval Climatic Anomaly. Cable strengthens this inference by showing that these events correspond exactly with the timing of two different geographic patterns of megadrought as defined by modern climate models.

Cable extends his study by testing the proposition that the former residents of the coastal zone migrated to surrounding interior regions where the effects of drought were less severe. Abundant support for this expectation is found in the archaeology of these regions, including evidence of accelerated population growth, crowding, and increased regional hostilities. Another important implication of immigration is the eventual coalescence of ethnic and/or culturally different social groups and the ultimate transformation of societies into new cultural syntheses. Evidence for this process is not yet well documented in the Southeast, but Cable draws on his familiarity with the drought-related Puebloan intrusions into the Hohokam Core Area of southern Arizona during the thirteenth and fourteenth centuries to suggest strategies for examining coalescence in the Southeast. The narrative concludes by addressing the broad implications of late prehistoric societal collapse for today’s human-propelled global warming era that portends similar but much more long-lasting consequences.
AUTHOR BIOGRAPHY
John S. Cable is director and president of Palmetto Research Institute.
TABLE OF CONTENTS

1. The Central South Carolina Coast: At the Margins of South Appalachian Mississippian Interaction

2. A Model of Ceramic Change for the Eastern Wing of South Appalachian Mississippian

3. The Fifteenth-Century Depopulation of the Central South Carolina Coast

4. The Cultural and Natural Geography of Megadrought

5. Regions of the Greater Desert of Ocute

6. Migration to the Ring of Drought Resilience

8. The Broader Implications of Late Prehistoric Societal Collapse and Transformation in the Southern Latitudes of the United States during an Age of Global Warming