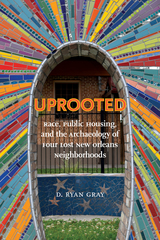 Uprooted: Race, Public Housing, and the Archaeology of Four Lost New Orleans Neighborhoods uses archaeological research on four neighborhoods that were razed during the construction of public housing in World War II–era New Orleans. Although each of these neighborhoods was identified as a “slum” historically, the material record challenges the simplicity of this designation. D. Ryan Gray provides evidence of the inventiveness of former residents who were marginalized by class, color, or gender and whose everyday strategies of survival, subsistence, and spirituality challenged the city’s developing racial and social hierarchies.

These neighborhoods initially appear to have been quite distinct, ranging from the working-class Irish Channel, to the relatively affluent Creole of Color–dominated Lafitte area, to the former location of Storyville, the city’s experiment in semilegal prostitution. Archaeological and historical investigations suggest that race was the crucial factor in the areas’ selection for clearance. Each neighborhood manifested a particular perceived racial disorder, where race intersected with ethnicity, class, or gender in ways that defied the norms of Jim Crow segregation.

Gray’s research makes use of both primary documents—including census records, city directories, and even the brothel advertising guides called “Blue Books”—and archaeological data to examine what this entailed at a variety of scales, reconstructing narratives of the households and communities affected by clearance. Public housing, both in New Orleans and elsewhere, imposed a new kind of control on urban life that had the effect of making cities both more segregated and less equal. The story of the neighborhoods that were destroyed provides a reminder that their erasure was not an inevitable outcome, and that a more equitable and just city is still possible today. A critical examination of the rise of public housing helps inform the ongoing debates over its demise, especially in light of the changing face of post-Katrina New Orleans.
AUTHOR BIOGRAPHY
D. Ryan Gray is associate professor of anthropology at the University of New Orleans.
TABLE OF CONTENTS

Chapter 2. Subjectivity, Race, and the Birth of Public Housing in New Orleans