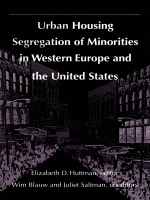 This book provides an expert examination and comparison of housing segregation in major population centers in the United States and Western Europe and analyzes successes and failures of government policies and desegregation programs in the United States, the United Kingdom, the Netherlands, Sweden, France, and West Germany.
The collection begins with a review of the historical development of housing segregation in these countries, describing current housing conditions, concentration of housing in each country’s leading cities, minority populations and the housing they occupy—specifically public, nonprofit, and owner-occupied dwellings. When focusing on the United States, the contributors assess housing segregation, antisegregation measures, and institutional racism toward blacks in the Midwest and South, and toward Mexican-Americans throughout American cities. Chapters dealing with Western Europe include housing segregation of South Asian and West Indian immigrants in Britain, immigrants in Sweden, Turkish, and Yugoslav “guest workers” in West Germany, and Algerian and other Arab groups in France. The book concludes with discussions of public housing policies; suburban desegregation, resegregation, and integration maintenance programs; specific integration stabilization programs; and desegregation efforts in one specific place.

Elizabeth Huttman, Professor of Sociology, California State University, is the coeditor of Housing Needs and Policy Approaches and the author of Introduction to Social Policy.

Wim Blauw is Associate Professor of Sociology at Erasmus University, Rotterdam. His is the author of Suburbanisatie in Sociale Contacten and coauthor of Emigreren.