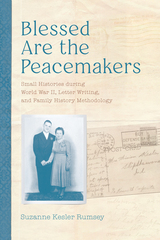 In the summer of 2013, Suzanne Kesler Rumsey discovered hundreds of letters exchanged between her late grandparents, Miriam and Benjamin Kesler. The letters, written between 1941 and 1946, were filled with typical wartime sentiments: love and longing, anguish at being apart, uncertainty about the war and the country’s future, and attempts at humor to keep their spirits up. What is unusual about their story is that Ben Kesler was not writing from a theater of war. Instead, Ben, a member of the Dunkard Brethren Church, was a conscientious objector. He, along with about 12,000 other men, opted to join the Civilian Public Service (CPS) and contribute to “work of national importance” at one of the 218 CPS camps around the country.

In Blessed Are the Peacemakers: Small Histories during World War II, Letter Writing, and Family History Methodology, Rumsey has mined not only her grandparents’ letters but also archival research on CPS camps and historical data from several Mennonite and Brethren archives to recapture the narrative of Ben’s service at two different camps and of Miriam’s struggle to support herself and her husband financially at the young age of seventeen. Ben and Miriam’s life during the war was extraordinarily ordinary, spanning six years of unrecognized and humble work for their country. Ben was not compensated for his work in the camps, and Miriam stayed home and worked as a day laborer, as a live-in maid, as a farmhand, and in the family butcher shop in order to earn enough money to support them both. Small histories like that of her grandparents, Rumsey argues, provide a unique perspective on significant political and historical moments.

Blessed Are the Peacemakers also explores the rhetorical functions of letter writing as well as the methodology of family history writing. Ben and Miriam’s letters provide an apt backdrop to examine the genre, a relatively understudied mode of literacy. Rumsey situates the young couple’s correspondence within ars dictaminis, the art of letter writing, granting new insights into the genre and how personal accounts shape our understanding of historical events.
AUTHOR BIOGRAPHY
Suzanne Kesler Rumsey is professor of English and linguistics at Purdue University Fort Wayne. Her work has appeared in College Composition and Communication (CCC), Literacy, Journal of Technical Writing and Communication, and Journal of Literacy and Technology. Rumsey serves on the editorial board of Literacy in Composition Studies and is a review editor for several journals, including Research in the Teaching of English, CCC, and enculturation.

Chapter 11. Conditions of the State Hospital in 1943