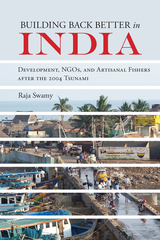 Critically examines the role of humanitarian aid and disaster reconstruction

Building Back Better in India: Development, NGOs, and Artisanal Fishers after the 2004 Tsunami addresses the ways in which natural disasters impact the strategies and priorities of neoliberalizing states in the contemporary era. In the light of growing scholarly and public concern over “disaster capitalism” and the tendency of states and powerful international financial institutions to view disasters as “opportunities” to “build back better,” Raja Swamy offers an ethnographically rich account of post-disaster reconstruction, its contested aims, and the mixed outcomes of state policy, humanitarian aid, and local resistance. Using the 2004 Indian Ocean tsunami as a case study, Swamy investigates the planning and implementation of a reconstruction process that sought to radically transform the geography of a coastal district in the Indian state of Tamil Nadu.

Drawing on an ethnographic study conducted in Tamil Nadu’s Nagapattinam District, Swamy shows how and why the state-led, multilaterally financed, and NGO-mediated reconstruction prioritized the displacement of coastal fisher populations. Exploring the substantive differences shaping NGO action, specifically in response to core political questions affecting the well-being of their ostensible beneficiaries, this account also centers the political agency of disaster survivors and their allies among NGOs in contesting the meanings of recovery while navigating the process of reconstruction.

If humanitarian aid brought together NGOs and fishers as givers and recipients of aid, it also revealed in its workings competing and sometimes contradictory assumptions, goals, interests, and strategies driving the fraught historical relationship between artisanal fishers and the state. Importantly, this research foregrounds the ambiguous role of NGOs involved in the distribution of aid, as well as the agency and strategic actions of the primary recipients of aid—the fishers of Nagapattinam—as they struggled with a reconstruction process that made receipt of the humanitarian gift of housing conditional on the formal abandonment of all claims to the coast. Building Back Better in India thus bridges scholarly concerns with disasters, humanitarianism, and economic development with those focused on power, agency, and resistance.
AUTHOR BIOGRAPHY
Raja Swamy is assistant professor in the Department of Anthropology at the University of Tennessee, Knoxville. Learn more at www.bbbindia.org.
TABLE OF CONTENTS

Chapter 1. The Tsunami of 2004 and Its Aftermath

Chapter 2. Artisanal Fishers, the State, and an NGO

Part II. The Politics of Humanitarianism