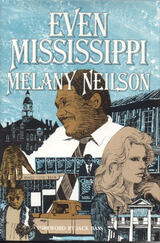 Even Mississippi is a well-crafted and engaging account that is not only good reading but also a penetrating commentary on several social, political, and historical themes. This is the story of Robert Clark’s two unsuccessful campaigns for a Congressional seat, in 1982 and 1984, and is written by the young woman who served as the only white staff member during the first campaign and one of a few whites during the second. Using the campaign as a starting point, the author takes us on a journey into the Mississippi Delta, where the progress of the last two decades has eluded America’s truly forgotten poor, where blacks like Clark move from cotton rows to politics as they work toward a new way of life.
Describing the isolation of a small town, Neilson recounts how the acculturation process worked in Mississippi and how it effectively molded blacks and whites. Even Mississippi is the story of a girl, a family, struggling with two powerful worlds, one dying and the other in the process of birth. Ole Miss, manners, and morals aside, there is something here that measure the heartbeat of what we once called “the South.” There are the genteel people and the plain folk, juke joints and Garden clubs, continuity and change, love and hate the good times and the bad. But it is Ed Tye, the author’s father, who is the personification of the struggle with the past that eventually loses out to the forces of change. Both black and white readers will appreciate his dilemma, his sense of loyalty, and his attachment to his family.
AUTHOR BIOGRAPHY
Melany Neilson is a freelance writer from Lexington, Mississippi. Jack Brass is a Professor in the Department of Journalism at the University of Mississippi.