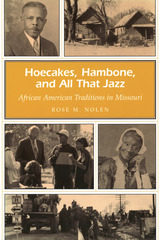 Many African Americans in Missouri are the descendants of slaves brought by the French or the Spanish to the Louisiana Territory in the 1700s or by Americans who moved from slave states after the Louisiana Purchase in the 1800s. In Hoecakes, Hambone, and All That Jazz, Rose M. Nolen explores the ways in which those Missouri “immigrants with a difference”—along with other Africans brought to America against their will—developed cultural, musical, and religious traditions that allowed them to retain customs from their past while adapting to the circumstances of the present.

Nolen writes, “Instead of the bond of common ancestors and a common language, which families had shared in Africa, the enslaved in the United States were bound together by skin color, hair texture, and condition of bondage. Out of this experience a strong sense of community was born.” Nolen traces the cultural traditions shaped by African Americans in Missouri from the early colonial period through the Civil War and Reconstruction and shows how those traditions were reshaped through the struggles of the civil rights movement and integration. Nolen demonstrates how the strong sense of community built on these traditions has sustained African Americans throughout their history.
Nolen focuses on some of the extraordinary Missourians produced by that community, among them William Wells Brown, “the first black man born in America to write plays, a novel, and accounts of his travels in Europe, as well as a ‘slave narrative’”; John Berry Meachum, a former slave who founded a “floating school,” anchored in the Mississippi River and thus exempt from state law, where blacks could be educated; J. W. “Blind” Boone, the celebrated composer and concert pianist; Elizabeth Keckley, who purchased her freedom, started her own business, and became dress designer and confidante to Mary Todd Lincoln; and Lucinda Lewis Haskell, daughter of a former slave, who helped establish the St. Louis Colored Orphan’s Home.
Hoecakes, Hambone, and All That Jazz recalls the many advances African Americans have made throughout Missouri’s history and uses the accomplishments of individuals to demonstrate the considerable contribution of African American culture to Missouri and all of the United States.
AUTHOR BIOGRAPHY
Rose M. Nolen is a columnist for the Columbia Missourian.
REVIEWS
"An important—and highly readable—contribution to the history of African-American life in Missouri."—Arkansas Review