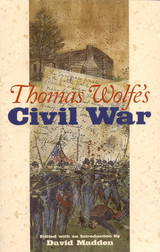 This collection of Thomas Wolfe’s writings demonstrates the centrality of the Civil War to Wolfe’s literary concerns and identity. From Look Homeward, Angel to The Hill Beyond and The Web and the Rock, Wolfe perpetually returned to the themes of loss, dissolution, sorrow, and romance engendered in the minds of many southerners by the Civil War and its lingering aftermath. His characters reflect time and again on Civil War heroes and dwell on ghostlike memories handed down by their mothers, fathers, and grandfathers. Wolfe and his protagonists compare their contemporary southern landscape to visions they have conjured of its appearance before and during the war, thereby merging the past with the present in an intense way. Ultimately, Wolfe’s prose style—incantatory and rhapsodic—is designed to evoke the national tragedy on an emotional level.

Selections of Wolfe’s writings in this collection include short stories ("Chickamauga," "Four Lost Men," "The Plumed Knight"), excerpts from his novels (O Lost, the restored version of Look Homeward, Angel, The Hills Beyond, and Of Time and the River) and a play, Mannerhouse, edited and introduced by David Madden. Madden, who makes the provocative claim that everything a southern writer writes derives from the Civil War experience, also highlights many issues essential to understanding Wolfe’s absorption with the Civil War.

David Madden is Founding Director of the United States Civil War Center and Donald and Velvia Crumbley Professor of Creative Writing at Louisiana State University. Founder of the Civil War Book Review, he has authored or edited more than forty books, including Classics of Civil War Fiction, and The Suicide’s Wife, which was made into a CBS movie.

REVIEWS
“Wolfe’s perspective of seeing the Civil War and its aftermath from the eyes of his Tar Heel mother and his Pennsylvania father gives a special coloring and tone to his treatment of that terrible period in American history. . . . Madden serves Wolfe well here as he is both a skilled writer and a knowledgeable Civil War historian.”
—John Idol, author of A Thomas Wolfe Companion and Literary Masters: Thomas Wolfe
— -