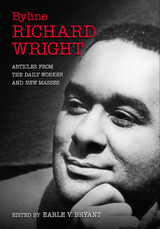 AUTHOR BIOGRAPHY
Earle V. Bryant is Professor of English at the University of New Orleans where he teaches American and African American literature. He has written extensively on Richard Wright, Charles Chesnutt, and Bernard Malamud and is at work on a book on Dorothy West. A native of Philadelphia, Bryant now lives in New Orleans.
REVIEWS
“Times were hard in the Harlem of the late 1930s, very hard. But Byline, Richard Wright reveals that thousands of class-conscious antiracists, both Party members and rank-and-file activists, threw themselves into organizing efforts guided by the vision of a better world. The young journalist who recorded this activity put his considerable talents into the service of this movement. This is a history—both political and literary—that we should honor and share.”—American Literary History


“By reading Wright’s journalism through the lens of narratology, Bryant is able to foreground insightful analyses of political implications and aesthetic qualities and to tell us many things about the strengths and weaknesses of Wright’s accomplishments. Byline is Bryant’s effort ‘to bring Wright’s early newspaper work out obscurity and into the light where it can be read and appreciated.’” ―Resources for American Literary Study