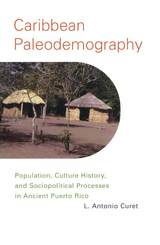 According to the European chronicles, at the time of contact, the Greater Antilles were inhabited by the Taino or Arawak Indians, who were organized in hierarchical societies. Since its inception Caribbean archaeology has used population as an important variable in explaining many social, political, and economic processes such as migration, changes in subsistence systems, and the development of institutionalized social stratification.

In Caribbean Paleodemography, L. Antonio Curet argues that population has been used casually by Caribbean archaeologists and proposes more rigorous and promising ways in which demographic factors can be incorporated in our modeling of past human behavior. He analyzes a number of demographic issues in island archaeology at various levels of analysis, including inter- and intra-island migration, carrying capacity, population structures, variables in prehistory, cultural changes, and the relationship with material culture and social development. With this work, Curet brings together the diverse theories on Greater Antilles island populations and the social and political forces governing their growth and migration.

AUTHOR BIOGRAPHY
L. Antonio Curet is Assistant Curator of Archaeology at the Field Museum and Adjunct Assistant Professor of Anthropology at the University of Illinois, Chicago, and coeditor of Cuban Archaeology.
REVIEWS
"A really substantial contribution to Caribbean prehistory. . . . Caribbean Paleodemography combines a highly significant discussion of Caribbean archaeology with a very useful introduction to paleodemography."
—Samuel M. Wilson, author of Hispaniola
— -

"This volume exemplifies and illustrates the way that population studies and archaeology come together."
—CHOICE
— -