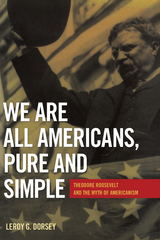 The turn of the 20th century represented one of the most chaotic periods in the nation's history, as immigrants, Native Americans, and African Americans struggled with their roles as Americans while white America feared their encroachments on national identity. This book examines Theodore Roosevelt’s public rhetoric—speeches, essays, and narrative histories—as he attempted to craft one people out of many. Leroy G. Dorsey observes that Roosevelt's solution to the problem appeared straightforward: everyone could become "Americans, pure and simple" if they embraced his notion of "Americanism." Roosevelt grounded his idea of Americanism in myth, particularly the frontier myth—a heroic combination of individual strength and character. When nonwhites and immigrants demonstrated these traits, they would become true Americans, earning an exalted status that they had heretofore been denied.

Dorsey’s analysis illuminates how Roosevelt's rhetoric achieved a number of delicate, if problematic, balancing acts. Roosevelt gave his audiences the opportunity to accept a national identity that allowed "some" room for immigrants and nonwhites, while reinforcing their status as others, thereby reassuring white Americans of their superior place in the nation. Roosevelt’s belief in an ordered and unified nation did not overwhelm his private racist attitudes, Dorsey argues, but certainly competed with them. Despite his private sentiments, he recognized that racist beliefs and rhetoric were divisive and bad for the nation’s progress. The resulting message he chose to propagate was thus one of a rhetorical, if not literal, melting pot.

By focusing on Roosevelt’s rhetorical constructions of national identity, as opposed to his personal exploits or his role as a policy maker, We Are All Americans offers new insights into Roosevelt’s use of public discourse to bind the nation together during
one of the most polarized  periods in its history.
AUTHOR BIOGRAPHY
Leroy G. Dorsey is Associate Professor of Communication at Texas A&M University and author of The Presidency and Rhetorical Leadership.
TABLE OF CONTENTS