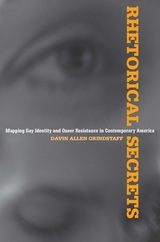 Davin Allen Grindstaff, through a series of close textual analyses examining public discourse, uncovers the rhetorical modes of persuasion surrounding the construction of gay male sexual identity. In Part One, Grindstaff establishes his notion of the "rhetorical secret" central to constructions of gay male identity: the practice of sexual identity as a secret, its promise of a coherent sexual self, and the perpetuation of secrecy as a product and strategy of heteronormative discourse.
Grindstaff continues in Part Two to examine major issues related to contemporary conceptions of gay male identity: overturning sodomy laws; public debates over same-sex marriages; medical and social responses to the HIV/AIDS crisis; the rhetorical power of hyper-masculine body images and homoeroticism to creative communities; and, finally, what Grindstaff considers to be the most mysterious and significant rhetorical practice of all: coming out of the closet.
By investigating the public discourse--texts and images that circulate, produce knowledge, and become means of persuasion--surrounding the constructions of sexual identity, Grindstaff challenges heteronormative concepts of sexuality itself, thus creating new maps of social power and new paths of resistance.
AUTHOR BIOGRAPHY
Davin Allen Grindstaff is a senior lecturer and director of the Basic Speech course at Georgia State University.