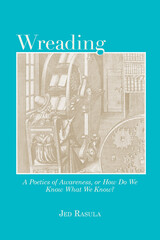 A diverse collection of essays and interviews on reading, teaching, and writing poetry from a preeminent critic and scholar

Jed Rasula is a distinguished scholar of avant-garde poetics, noted for his erudition, intellectual range, and critical independence. Wreading: A Poetics of Awareness, or How Do We Know What We Know? is a collection of essays and interviews that reflects the breadth and diversity of his curiosity.

While this volume presents highlights from Rasula’s criticism, it also serves as a carefully assembled intellectual autobiography. Wreading consists of two parts: an assortment of Rasula’s solo criticism and selected interviews and conversations with other poets and scholars. These detailed conversations are with Evelyn Reilly, Leonard Schwartz, Tony Tost, Mike Chasar, Joel Bettridge, and Ming-Qian Ma. Their exchanges address ecopoetics, the corporate university, the sheer volume of contemporary poetry, and more. This substantial set of dialogues gives readers a glimpse inside a master critic’s deeply informed critical practice, illuminating his intellectual touchstones.

The balance between essay and interview achieves a distillation of Rasula’s long-established idea of “wreading.” In his original use, the term denotes how any act of criticism inherently adds to the body of writing that it purports to read. In this latest form, Wreading captures a critical perception that sparks insight and imagination, regardless of what it sees.

AUTHOR BIOGRAPHY
Jed Rasula is Helen S. Lanier Distinguished Professor of English at the University of Georgia, and author of a dozen books, including Syncopations: The Stress of Innovation in Contemporary American Poetry, Destruction Was My Beatrice: Dada and the Unmaking of the Twentieth Century and History of a Shiver: The Sublime Impudence of Modernism.