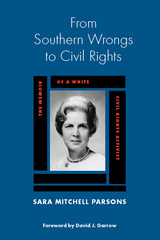 This first-hand account tells the story of turbulent civil rights era Atlanta through the eyes of a white upper-class woman who became an outspoken advocate for integration and racial equality.

As a privileged white woman who grew up in segregated Atlanta, Sara Mitchell Parsons was an unlikely candidate to become a civil rights agitator. After all, her only contacts with blacks were with those who helped raise her and those who later helped raise her children. As a young woman, she followed the conventional path expected of her, becoming the dutiful wife of a conservative husband, going to the country club, and playing bridge. But unlike many of her peers, Parsons harbored an increasing uneasiness about racial segregation.

In a memoir that includes candid diary excerpts, Parsons chronicles her moral awakening. With little support from her husband, she runs for the Atlanta Board of Education on a quietly integrationist platform and, once elected, becomes increasingly outspoken about inequitable school conditions and the slow pace of integration. Her activities bring her into contact with such civil rights leaders as Martin Luther King, Jr., and his wife, Coretta Scott King. For a time, she leads a dual existence, sometimes traveling the great psychic distance from an NAACP meeting on Auburn Avenue to an all-white party in upscale Buckhead. She eventually drops her ladies' clubs, and her deepening involvement in the civil rights movement costs Parsons many friends as well as her first marriage.

Spanning sixty years, this compelling memoir describes one woman's journey to self-discovery against the backdrop of a tumultuous time in our country's history.

"Sara Parsons's efforts to integrate and improve schools and her attack on complacent white churches made her a pariah and resulted in the break-up of her marriage. . . . She was one of the South's first white elected officials who openly advocated racial equality.--Atlanta Journal-Constitution

"Sara Parsons in the 1960's [was] the lone white member of the Atlanta school board to support integration. . . . Jimmy Carter may not have had the courage [then] to meet with Martin Luther King. But Ms. Parsons did. She met Dr. King on several occasions, even though each time it seemed to cost her another white friend.--New York Times

Sara Mitchell Parsons lives in Atlanta. She has received numerous honors for her community activism, most recently being named 1994 Role Model of the Year by the Older Women's League in Atlanta.

David J. Garrow, Presidential Distinguished Professor of Emory University School of Law, is the author of Bearing the Cross, a Pulitzer Prize-winning biography of Martin Luther King, Jr. and Liberty and Sexuality: The right to Privacy and the making of Roe vs. Wade.