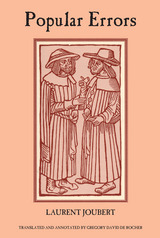 Laurent Joubert was an important figure in the medical world of the French Renaissance. Born in 1529, he became a doctor at age 29 and shortly thereafter was appointed personal physician to Catherine de Medici and later became physician to three French monarchs. Joubert was an educator as well as a physician, and he wrote several works of medical literature, including his most controversial work, Erreurs populaires. While the work focuses on popular misconceptions concerning medicine and physicians in France in the 1500s, it also represents a wealth of information on the social, economic, political, and religious worldviews that framed and thus supported the development and conduct of medical science.

Gregory de Rocher’s skill as a translator brings this highly readable and very funny book to life. Many topics central to Joubert’s thesis in the 1500s remain contemporary themes in the popular and scholarly literature of the 1980s.

Gregory David de Rocher is Professor of Romance Languages and Classics, The University of Alabama