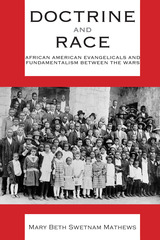 Doctrine and Race examines the history of African American Baptists and Methodists of the early twentieth century and their struggle for equality in the context of white Protestant fundamentalism.

By presenting African American Protestantism in the context of white Protestant fundamentalism, Doctrine and Race: African American Evangelicals and Fundamentalism between the Wars demonstrates that African American Protestants were acutely aware of the manner in which white Christianity operated and how they could use that knowledge to justify social change. Mary Beth Swetnam Mathews’s study scrutinizes how white fundamentalists wrote blacks out of their definition of fundamentalism and how blacks constructed a definition of Christianity that had, at its core, an intrinsic belief in racial equality. In doing so, this volume challenges the prevailing scholarly argument that fundamentalism was either a doctrinal debate or an antimodernist force. Instead, it was a constantly shifting set of priorities for different groups at different times.

A number of African American theologians and clergy identified with many of the doctrinal tenets of the fundamentalism of their white counterparts, but African Americans were excluded from full fellowship with the fundamentalists because of their race. Moreover, these scholars and pastors did not limit themselves to traditional evangelical doctrine but embraced progressive theological concepts, such as the Social Gospel, to help them achieve racial equality. Nonetheless, they identified other forward-looking theological views, such as modernism, as threats to “true” Christianity.

Mathews demonstrates that, although traditional portraits of “the black church” have provided the illusion of a singular unified organization, black evangelical leaders debated passionately among themselves as they sought to preserve select aspects of the culture around them while rejecting others. The picture that emerges from this research creates a richer, more profound understanding of African American denominations as they struggled to contend with a white American society that saw them as inferior.

Doctrine and Race melds American religious history and race studies in innovative and compelling ways, highlighting the remarkable and rich complexity that attended to the development of African American Protestant movements.
AUTHOR BIOGRAPHY
Mary Beth Swetnam Mathews is an associate professor of religion at the University of Mary Washington and is the author of Rethinking Zion: How the Print Media Placed Fundamentalism in the South.
TABLE OF CONTENTS
Contents
Acknowledgments
Introduction
1. “Too Frequently They Are Led Astray”: White Fundamentalists and Race
2. “What Is the Matter with White Baptists?”: African Americans’ Initial Encounters with Fundamentalism
3. “We Need No New Doctrine for This New Day”: African Americans Adapt Fundamentalism
4. “Only the Gilded Staircase to Destruction”: African American Protestants Confront the Social Challenges of Modernity
5. “And This Is Where the White Man’s Christianity Breaks Down”: Race Relations and Ecclesiology in the Era of Lynchings and Jim Crow
Conclusion
Notes
Bibliography
Index