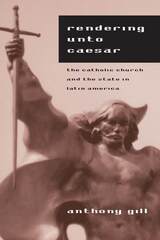 Nowhere has the relationship between state and church been more volatile in recent decades than in Latin America. Anthony Gill's controversial book not only explains why Catholic leaders in some countries came to oppose dictatorial rule but, equally important, why many did not. Using historical and statistical evidence from twelve countries, Gill for the first time uncovers the causal connection between religious competition and the rise of progressive Catholicism. In places where evangelical Protestantism and "spiritist" sects made inroads among poor Catholics, Church leaders championed the rights of the poor and turned against authoritarian regimes to retain parishioners. Where competition was minimal, bishops maintained good relations with military rulers. Applying economic reasoning to an entirely new setting, Rendering unto Caesar offers a new theory of religious competition that dramatically revises our understanding of church-state relations.
TABLE OF CONTENTS


Acknowledgments
1. Introduction: Caesar and the Church
2. A Brief History of Church-State Relations in Latin America
3. An Economic Model of Church-State Relations
4. Luther's Shadow: Protestant Competition and the Catholic Response
5. Chile: A Preferential Option for the Poor
6. Argentina: complicity with the Devil
7. The Institutional Limits of Catholic Progressivism
Postscript
Appendix: Rationality and Religion
Notes
References
Index