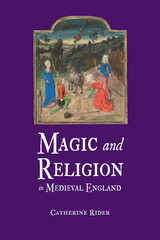 During the Middle Ages, many occult rituals and beliefs existed and were practiced alongside those officially sanctioned by the church. While educated clergy condemned some of these as magic, many of these practices involved religious language, rituals, or objects. For instance, charms recited to cure illnesses invoked God and the saints, and love spells used consecrated substances such as the Eucharist. Magic and Religion in Medieval England explores the entanglement of magical practices and the clergy during the Middle Ages, uncovering how churchmen decided which of these practices to deem acceptable and examining the ways they persuaded others to adopt their views.

Covering the period from 1215 to the Reformation, Catherine Rider traces the change in the church’s attitude to vernacular forms of magic. She shows how this period brought the clergy more closely into contact with unofficial religious practices than ever before, and how this proximity prompted them to draw up precise guidelines on distinguishing magic from legitimate religion. Revealing the necessity of improving clerical education and the pastoral care of the laity, Magic and Religion in Medieval England provides a fascinating picture of religious life during this period.
AUTHOR BIOGRAPHY
Catherine Rider is a lecturer in the Department of History at the University of Exeter, UK.
REVIEWS
“Rider . . . evinces a pastoral appreciation of the human condition with its manifold worries while maintaining the medieval distinctions between fold customs, religion, and magic. Highly recommended.”
— Choice


Introduction
1. Predicting the Future and Healing the Sick: Magic, Science and the Natural World
2. Charms, Prayers and Prophecies: Magic and Religion
3. Flying Women, Fairies and Demons
4. Harm and Protection
5. Channelling the Stars and Summoning Demons: Magical Texts
6. Arguing Against Magic
7. Action Against Magic
Conclusion: Religion and Magic: Medieval England and Beyond