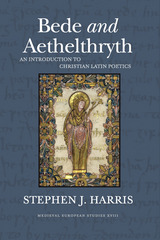 Bede and Aethelthryth asks why Christians in Britain around the year 700 enjoyed Latin poetry. What did they see in it? What did they get from it? This book attempts to reconstruct the horizon of expectation of a highly learned, Latin-speaking nun as she encounters a fifty-line poem by the Venerable Bede, the Hymn to Aethelthryth.

The reconstruction is hypothetical and derived from grammatical manuals, learned commentaries from the early medieval period (especially Servius’s commentary on Virgil), and a wide variety of aesthetic observations by classical and medieval readers. The first four chapters describe basic expectations of a reader of Christian Latin poetry. The fifth chapter places the Hymn in its context within Bede’s Ecclesiastical History. A few pages after Bede records his hymn, Caedmon will recite his own hymn under the watchful eye of Whitby’s Abbess Hild, who was a friend of Aethelthryth.

Both hymns are attempts to reform the lyric traditions of pagan Rome and pagan Anglo-Saxon England in the light of Christian teaching. The last three chapters contain a line-by-line commentary on Bede’s alphabetic, epanaleptic elegy.