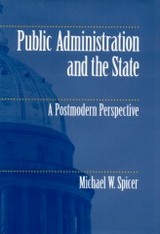 In this critical examination of public administration's pervasive vision of a powerful state, Spicer thoughtfully reconsiders the relationship between activities of governance and concepts of the state.

Woodrow Wilson argued for a state led by a powerful government, guided by science and enlightened experts, for the accomplishment of a set of collective purposes—in other words, a purposive state. Michael Spicer contends that though Wilson and those who followed him have not typically explored questions of political and constitutional theory in their writing, a clear and strong vision of the state has emerged in their work nonetheless.

Building upon the work of Dwight Waldo and others who have sought to explore and reveal the political theory behind the seemingly neutral language of administration, Spicer explores the roots—both historical and philosophical—of the purposive state. He considers the administrative experience of 18th-century Prussia and its relationship to the vision of the purposive state, and examines the ways this idea has been expressed in the 20th century. He then looks at the practical problems such a vision creates for public policy in a fragmented postmodern political culture. Finally, Spicer explores an alternative view of public administration—one based on a civil association model appropriate to our constitutional traditions and contemporary culture.

"This short and well-written volume provides a framework for understanding the role of the state in contemporary public administration."--Political Science Quarterly