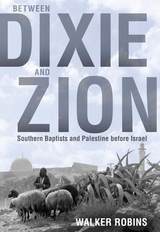 One week after the establishment of the State of Israel in 1948, delegates to the Southern Baptist Convention (SBC) repeatedly and overwhelmingly voted down resolutions congratulating fellow Southern Baptist Harry Truman on his role in Israel’s creation. From today’s perspective, this seems like a shocking result. After all, Christians—particularly the white evangelical Protestants who populate the SBC—are now the largest pro-Israel constituency in the United States. How could conservative evangelicals have been so hesitant in celebrating Israel’s birth in 1948? How did they then come to be so supportive?

Between Dixie and Zion: Southern Baptists and Palestine before Israel addresses these issues by exploring how Southern Baptists engaged what was called the “Palestine question”: whether Jews or Arabs would, or should, control the Holy Land after World War I. Walker Robins argues that, in the decades leading up to the creation of Israel, most Southern Baptists did not directly engage the Palestine question politically. Rather, they engaged it indirectly through a variety of encounters with the land, the peoples, and the politics of Palestine. Among the instrumental figures featured by Robins are tourists, foreign missionaries, Arab pastors, converts from Judaism, biblical interpreters, fundamentalist rebels, editorialists, and, of course, even a president. While all revered Palestine as the Holy Land, each approached and encountered the region according to their own priorities.

Nevertheless, Robins shows that Baptists consistently looked at the region through an Orientalist framework, broadly associating the Zionist movement with Western civilization, modernity, and progress over and against the Arabs, whom they viewed as uncivilized, premodern, and backward. He argues that such impressions were not idle—they suggested that the Zionists were bringing to fruition Baptists’ long-expressed hopes that Israel would regain the prosperity it had held in the biblical era, the Holy Land would one day be revived, and biblical prophecies preceding the return of Christ would be fulfilled.
AUTHOR BIOGRAPHY
Walker Robins is lecturer in history at Merrimack College in North Andover, Massachusetts. His work has been published in the Journal of Church and State, Journal of Southern Religion, Baptist History & Heritage Journal, and Israel Studies.
TABLE OF CONTENTS

Chapter 1. Before the Palestine Question