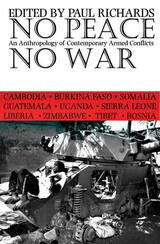 A rash of small wars erupted after the Cold War ended in Africa, the Balkans, and other parts of the former communist world. The wars were in “inter-zones,” the spaces left where weak states had withdrawn or collapsed. Consequently the debate over what constitutes war has returned to basics. No Peace, No War departs from the usual analysis that considers the new wars mindless mass actions to offer the paradoxical idea that to understand war one must deny war special status. Rather than leave war to the security specialists, these writers attempt to grasp its character as one among many aspects of social reality.