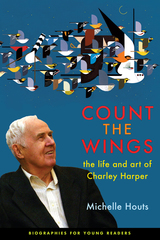 When you look at a bird, do you see feathers and a beak? Or do you see circles and triangles? Artist Charley Harper spent his life reducing subjects to their simplest forms, their basic lines and shapes. This resulted in what he called minimal realism and the style that would become easily recognized as Charley Harper’s. Art fans and nature lovers around the world fell in love with Harper’s paintings, which often featured bright colors and intriguing nature subjects.

Harper’s love of painting and drawing led him from the hills of West Virginia to the bombed-out villages of Europe, to the streets of New York City, and to the halls of the Art Academy of Cincinnati. How did the farm boy who didn’t know a single artist become one of America’s most recognized midcentury modern painters? The answer is simple. He did it by counting the wings.

Count the Wings is the first book for middle-grade readers about Harper’s life and work. Author Michelle Houts worked closely with the Harper estate to include full-color illustrations, plentiful supplemental materials, and discussion questions that will intrigue and engage young readers. Count the Wings is part of our acclaimed Biographies for Young Readers series, which brings smart, expertly researched books about often overlooked but exceptional individuals to school-age readers.

Michelle Houts holds degrees in special education and speech-language pathology. She is the author of several fiction and nonfiction books for young readers, including the award-winning The Beef Princess of Practical County,The Practical County Drama Queen, and Winterfrost.