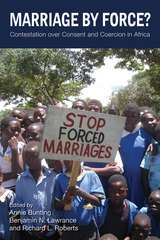 With forced marriage, as with so many human rights issues, the sensationalized hides the mundane, and oversimplified popular discourses miss the range of experiences. In sub-Saharan Africa, the relationship between coercion and consent in marriage is a complex one that has changed over time and place, rendering impossible any single interpretation or explanation.

The legal experts, anthropologists, historians, and development workers contributing to Marriage by Force? focus on the role that marriage plays in the mobilization of labor, the accumulation of wealth, and domination versus dependency. They also address the crucial slippage between marriages and other forms of gendered violence, bondage, slavery, and servile status.

Only by examining variations in practices from a multitude of perspectives can we properly contextualize the problem and its consequences. And while early and forced marriages have been on the human rights agenda for decades, there is today an unprecedented level of international attention to the issue, thus making the coherent, multifaceted approach of Marriage by Force? even more necessary.

Annie Bunting is an associate professor in the Law and Society program at York University in Toronto. Her forthcoming book is The Invention of Contemporary Slavery, edited with Joel Quirk.

Benjamin N. Lawrance is an author and editor of eleven books, and editor in chief of the African Studies Review. He is professor of History at the University of Arizona.

Richard L. Roberts directs the Center for African Studies at Stanford University. His books include Trafficking in Slavery’s Wake: The Experience of Women and Children in Africa, edited with Benjamin N. Lawrance.

TABLE OF CONTENTS
Contents
Foreword
Acknowledgments
Introduction: Something Old, Something New?
Part 1: Colonial Struggles
1: Constrained Consent
2: Forced Marriage, Gender, and Consent in Igboland, 1900–1936
3: Debating “Early Marriage” in Colonial Kenya, 1920–50
4: Italian Weddings and Memory of Trauma
Part 2: Postindependence Transformation
5: Ukuthwala, Forced Marriage, and the Idea of Custom in South Africa’s Eastern Cape
6: Concubinage as Forced Marriage?
7: Challenges and Constraints
8: Resisting Patriarchy, Contesting Homophobia
Part 3: Contemporary Perspectives
9: Consent, Custom, and the Law in Debates around Forced Marriage at the Special Court for Sierra Leone
10: Between Global Standards and Local Realities
11: Dreams of My Mother
12: “To Be Taken as a Wife Is a Form of Death”
Afterword: Historicizing Social Justice and the Longue Durée of Forced Marriage
About the Contributors
Index