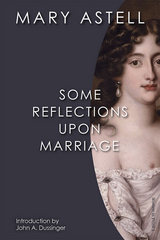 Some Reflections Upon Marriage
by Mary Astell
University of Illinois Press, 2015
eISBN: 978-0-252-09791-1
Published anonymously in 1700, Some Reflections upon Marriage lamented the inequities of the institution of marriage and reasoned against it with both traditional and innovative arguments. Mary Astell's tract, written in response to an infamous divorce case, forcefully argued against the grim but all-too-common prospect of a marriage of necessity to a man in search of power, money, or a trophy wife. Astell proposed education as the solution to women's second-class status, stating that knowledge alone could lead to a partnership based on friendship and respect. "Let us learn to pride ourselves in something more excellent than the invention of a fashion," she wrote, and her well-reasoned arguments soon won her a wide readership.
AUTHOR BIOGRAPHY
Mary Astell was born in 1668. After moving to Chelsea, outside London, she enjoyed the patronage and friendship of many women of means and cultivated a circle of admirers with her philosophically informed arguments. Her other works include A Serious Proposal to the Ladies, published in two parts. Astell later opened a school for girls in Chelsea. She died in 1731. John A. Dussinger is Professor Emeritus of English at the University of Illinois at Urbana-Champaign.
TABLE OF CONTENTS
Cover
About Women in Print
Title
Copyright
Table of Content
Introduction
Appendix
Notes
Bibliography
Some Reflections Upon Marriage