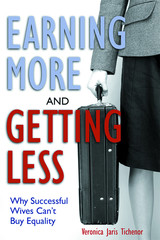 For nearly two decades the wage gap between men and women has remained virtually unchanged. Women continue to earn, on average, 80 cents for every dollar that men earn. Yet despite persistent discrimination in wages, studies are also beginning to show that a growing number of women are out-earning their husbands. Nationwide, nearly one-third of working women are the chief breadwinners in their families. The trend is particularly pronounced among the demographic of highly educated women. Does this increase in earnings, however, equate to a shift in power dynamics between husbands and wives?

In Earning More and Getting Less, sociologist Veronica Jaris Tichenor shows how, historically, men have derived a great deal of power over financial and household decisions by bringing home all (or most) of the family's income. Yet, financial superiority has not been a similar source of power for women. Tichenor demonstrates how wives, instead of using their substantial incomes to negotiate more egalitarian relationships, enable their husbands to perpetuate male dominance within the family.

Weaving personal accounts, in-depth interviews, and compelling narrative, this important study reveals disturbing evidence that the conventional power relations defined by gender are powerful enough to undermine hierarchies defined by money. Earning More and Getting Less is essential reading in sociology, psychology, and family and gender studies.
AUTHOR BIOGRAPHY
Veronica Jaris Tichenor is an assistant professor in the department of sociology at the State Univeristy of New York-Institute of Technology. She lives in the Mohawk Valley region of upstate New York.
TABLE OF CONTENTS