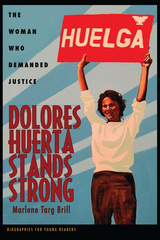 REVIEWS
“A biography for the times … Brill paints a vivid picture of her subject and calls attention to a civil rights leader who was often overshadowed by her male counterpart even as she fought sexism in her own community.… An excellent read for anyone hoping to believe one person can make a difference. Young readers will recognize Dolores Huerta’s rallying cry ‘Yes, we can!’ even as they are inspired by her vision for a better world.”—Kirkus Reviews (starred review)


“[Brill] takes complex issues, such as unionizing, collective bargaining, and Communism, and makes them comprehensible for the intended audience. Many of the issues Huerta championed—workers’ rights, the living conditions of immigrants, women’s equality—are still timely topics that will resonate with today’s youths.…VERDICT This well-told, age-appropriate account of a vital and essential activist deserves a place in all middle grade collections.”—School Library Journal (starred review)


“[Dolores Huerta Stands Strong] … effortlessly weaves Huerta’s personal story into the epic of her generation. Notes at the end of chapters give additional information about what society was like at the time, a crucial addition for young readers who may not have a deep sense of historical perspective and who believe that the world has always been the way it is right now.… This is a great addition to any collection and gives a fresh choice to readers who are investigating biographies.”—Karen Yingling, Ms. Yingling Reads