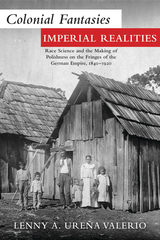 In Colonial Fantasies, Imperial Realities, Lenny Ureña Valerio offers a transnational approach to Polish-German relations and nineteenth-century colonial subjectivities. She investigates key cultural dynamics in the history of medicine, colonialism, and migration that bring Germany and Prussian Poland closer to the colonial and postcolonial worlds in Africa and Latin America. She also analyzes how Poles in the German Empire positioned themselves in relation to Germans and native populations in overseas colonies. She thus recasts Polish perspectives and experiences, allowing new insights into identity formation and nationalist movements within the German Empire.

Crucially, Ureña Valerio also studies the medical projects and scientific ideas that traveled from colonies to the German metropole, and vice versa, which were influential not only in the racialization of Slavic populations, but also in bringing scientific conceptions of race to the everydayness of the German Empire. As a whole, Colonial Fantasies, Imperial Realities illuminates nested imperial and colonial relations using sources that range from medical texts and state documents to travel literature and fiction. By studying these scientific and political debates, Ureña Valerio uncovers novel ways to connect medicine, migration, and colonialism and provides an invigorating model for the analysis of Polish history from a global perspective.

Lenny A. Ureña Valerio is an associate director of the Center for Latin American Studies at the University of Florida. Her primary research and teaching interests include imperial/colonial studies, European migration to Latin America, Polish diaspora in Brazil, the history of medicine and public health, and historical methods and theories.