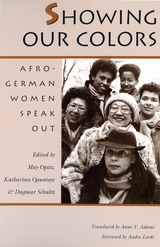 Showing Our Colors: Afro-German Women Speak Out is an English translation of the German book Farbe bekennen edited by author May Ayim, Katharina Oguntoye, and Dagmar Schultz. It is the first published book by Afro-Germans. It is the first written use of the term Afro-German.
TABLE OF CONTENTS
Cover
Title Page
Copyright Page
Contents
Foreword to the English Language Edition
Preface to the English Language Edition
Editors’ Introduction
Racism, Sexism, and Precolonial Images of Africa in Germany
The First Africans in Germany
The Middle Ages: “Moors” and White Christians
From “Moors” to “Negroes”
“Race”: The Construction of a Concept
Sexism and Racism
Notes
The Germans in the Colonies
“Cultural Mission” and “Heathen Mission”: The Emigrants' Sense of Mission
German Women in the Colonies
Colonization of Consciousness through Mission and “Education”
The Colonial Heritage
Notes
Defeat and Occupation of the Rhineland: The “Black Scourge”
“Black Rapists” and “Rhineland Bastards”
Protection of the Family and Forced Sterilization: Disgrace to the Race and Colonial Propaganda
Notes
Our Father Was Cameroonian, Our Mother, East Prussian, We Are Mulattoes
Afro-Germans after 1945: The So-Called Occupation Babies
The Self and the Other: A Digression on Race Terminology and Sexism
Scientific Studies on the Status of Afro-Germans in the 1950s
Notes
An “Occupation Baby” in Postwar Germany
“Aren't you Glad you can Stay Here?”
“Mirror the Invisible / Play the Forgotten”
Racism Here and Now
Everyday Racism in Books for Children and Youths
Afro-Germans Between Self-Assertion and Self-Denial
Identification and Self-Valuation
The “In-Between World” as Opportunity
Notes
Three Afro-German Women in Conversation with Dagmar Schultz
“What Makes me so Different in the Eyes of Others?”
Old Europe Meets Up with Itself in a Different Place
“All of a Sudden, I Knew what I Wanted”
“I Do the Same Things that Others Do”
Mother: Afro-German / Father: Ghanaian
The Break
What I've Always Wanted to Tell You
“I Never Wanted to Write, I just Couldn't Help Myself”
Recapitulation and Outlook
Translator’s Afterword
Literature and Addresses
Back Cover