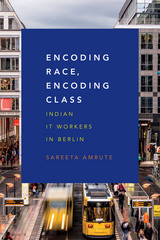 In Encoding Race, Encoding Class Sareeta Amrute explores the work and private lives of highly skilled Indian IT coders in Berlin to reveal the oft-obscured realities of the embodied, raced, and classed nature of cognitive labor. In addition to conducting fieldwork and interviews in IT offices as well as analyzing political cartoons, advertisements, and reports on white-collar work, Amrute spent time with a core of twenty programmers before, during, and after their shifts. She shows how they occupy a contradictory position, as they are racialized in Germany as temporary and migrant grunt workers, yet their middle-class aspirations reflect efforts to build a new, global, and economically dominant India. The ways they accept and resist the premises and conditions of their work offer new potentials for alternative visions of living and working in neoliberal economies. Demonstrating how these coders' cognitive labor realigns and reimagines race and class, Amrute conceptualizes personhood and migration within global capitalism in new ways.
AUTHOR BIOGRAPHY
Sareeta Amrute is Associate Professor of Anthropology at the University of Washington.
REVIEWS
-- Michiel Baas Economic and Political Weekly

3. Proprietary Freedoms in an IT Office  86

4. The Stroke of Midnight and the Spirit of Entrepreneurship: A History of the Computer in India  111

5. Computers Are Very Stupid Cooks: Reinventing Leisure as a Politics of Pleasure  137

A Speculative Conclusion: Secrets and Lives  185