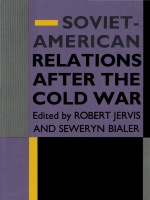 This important collection of essays explores the terrain of possible Soviet-American relations in the next decade. Starting from the premise that glasnost and perestroika will not be reversed, this expert group of contributors provides a wide-ranging and far-reaching analysis of Soviet-U.S. relations crucial to any current discussion of the topic.
Moving beyond the boundaries of traditional studies of international relations, the contributors here focus on such topics as public opinion and the relationship of domestic policy to foreign policy. Other areas of consideration include the Soviet-U.S. relationship and the Third World and East Asia, the role of the United Nations in Soviet and American policy in the 1990s, international environmental protection, and the Soviet opening to nonprovocative defense. A final section concludes with policy choices for the future regarding security strategies and prospects for peace.

Robert Jervis is Professor of Political Science and Director of the Institute of War and Peace Studies at Columbia University.

Seweryn Bialer is the Ruggles Professor of Political Science and Renee Robert Belfer Professor of International Relations at Columbia University.

1. Will the New World Be Better? / Robert Jervis 7

3. American Reactions to Changes in the USSR / Robert Dallek 48

4. Do the Changes within the Soviet Union Provide a Basis for Eased Soviet-American Relations? A Skeptical View / Colin S. Gray 61

7. The Soviet-U.S. Relationship and the Third World / Harold H. Saunders 109

12. The UN Rediscovered: Soviet and American Policy in the United Nations of the 1990s / Toby Trister Gati 197

14. America's Strategic Immunity: The Basis of a National Security Strategy / Eric A. Nordlinger 239